Oh great, you’re still here. At least that’s what I thought when I checked the stats to this neglected site. Seems as though there are plenty of Snarky admirers checking and re-checking to get their latest dose of snarky drivel. So, fine, here you go:

If you’re a music fan, listen to Zoe Keating. That’s all I have to say. And since I know you’re on a computer I know you’ll figure out a way to find her and listen to her. She’s haunted my existence during these rather bizarre holi-days.

Okay, okay, I’ll admit it: I listened to her nearly non-stop in my 24-hour drive to North Georgia to visit my family last week. I know I shouldn’t be driving 24-hours non-stop but, if you must, blame Zoe. The woman is a fucking genius. And it was nothing short of an honor to be simply driving to her most beautiful music.

Life in North Georgia is like you’d expect life in North Georgia to be: weird. Let’s just put it this way: it ain’t Vermont. And that goes both ways, good and bad. The North Georgians are rural like Vermonters. They have their pride in Georgian ways. And they have their extended families, rituals, and familial pride. And if that isn’t “good” enough for you, check out the above photo of my family’s annual holiday mud wrestling tournament. Yee-fucking-hah.

Since I was once “one of them,” I’ve got a ticket to ride. I can put on the necessary southern drawl faster than you can say “fix’n.” And it helps, too, to break down the distrust that envelopes anyone and everyone who dares to break the southern code by leaving the southern regions. But they like know anyone who leaves will be back. Sure, it might be when I’m sixty-five and can’t take the fucking northern weather any more, but they’re banking on the return.

That’s not to say they’re happy about it, either. Once betrayed, always betrayed. Why do you think so many lunatics still fly that goddamn rebel flag down there? Hint: They still feel betrayed. That, or if you want to be really real about it, they’re fucking idiots. Personally, I’m banking on the later.

The problem, of course, is that they’re also nice folk. And we all know from the Vermont experience what nice folk and racism/homophobia can amount to. Can you say: Take Back Vermont? I knew you could.

I guess that’s the problem with this nation as a whole. We know how to hate with a prideful smile. Worse, we know how to kill with a righteous rage. And we’re all too often wrong. Dead wrong. But we can find the shallowest of shallow reasons to make it all seem “right.”

But, I’m happy to report, even the North Georgians are turning against Bush and his ridiculous sinking ship of state. That, however, doesn’t mean they’re ready to embrace a Democrat as a replacement. Right now, they’re just seeing Bush as some kind of bad Republican apple, spoiling the whole barrel.

Having said that, I must say I agree with their lip-curling snarl at the mere mention of any of the so-called Democratic front-runners for 2008. Hillary’s an ass. And a big one at that. Edwards is yet another guilt-ridden moneyed “liberal,” all too willing to say whatever he thinks is most popular rather than what is most meaningful. And how can any of us ever forget that he walked sidestep with John Kerry? That alone should stain him for life. And then, of course, there’s Obama. While he’s currently every liberal’s wet dream, none of them have any clue who the fuck Obama is in the first place. Worse, who can tell me what Obama stands for? What has he fought for? Where does he draw his ideological lines? So far, all I’ve seen out of Obama is one hell of a public relations campaign, replete with all the necessary distancing from the issues and opinions that might actually mean something.

Sure, Obama spoke out against the war when he was running for the U.S. Senate. But what has Obama done as a U.S. Senator to stop the war now that he’s one of a hundred in a political body that can do things like – say – cut off the funding for this illegal and immoral war? The answer is NOTHING. But, strangely, that hasn’t stopped many liberals from nearly-unquestionably jumping on the Obama bandwagon.

To me, there’s nothing more telling about the dearth of liberal thought than the rush to the Obama bandwagon with nary a bit of substance to his substance-less crusade. Sadly, it’s another example of the liberals thirst for merely imitating conservatives. They see, for example, a Reagan or a Bush and then think they need to create the same kind of empty vessel to counter them. It apparently hasn’t dawned on them that their ideology is based in realism and that their politics should be based in the same concrete fixations. Instead, they seem to always be trying to play a game that the Republicans have already mastered. And, like all mere imitators, they realize too late that the master has re-created the rules when they finally think they’ve figured them out. And around and around it goes.

But what does this have to do with North Georgia? A lot, actually. And I’ll flesh it all out in future posts. For now, however, let me say: it’s nice to be back. I’ve been writing up a storm but, for better or worse, those words have been published elsewhere under other names. Now that things are a bit more settled, I’m hoping to be Snarky a bit more regularly.

As always, I look forward to your feedback. 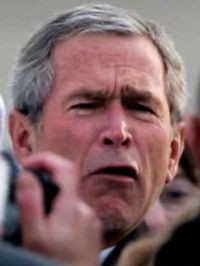 Okay, now we’re supposed to feel sorry for the Bush family because that doddering old fuck, George the Senior, got all teary eyed at a tribute for his under-achieving son, Jeb the mere Governor. Give me a break. Let him weep! Let the whole family weep! And while they’re weeping, let them think of the tens of thousands of people who’ve been killed because George the Junior’s idiotic and murderous insistence on persisting on a policy every sane and caring human being knew had gone awry from the moment of its inception.

But wait, the snarky strings of love and kindness are starting to be played. Perhaps the old man does deserve a moment of compassion. Remember, he was the guy the rightwing of the Republican Party called a big pussy for retreating in Iraq in the early 1990s. And it was the cynical plans of Cheney, Rumsfeld and his dopey little son that were meant to avenge Senior’s rather “wimpy” approach to world domination. I mean, come on, we’re the U.S. of Fucking-A, baby. There’s no backing down. No changing course, only staying the course, whether it’s a war, capitalism, deficits, or inequality. In their minds, you sink the fucking ship before you ever contemplate turning the rickety bastard around. Ivy League boys NEVER admit their mistakes because – well – Ivy League boys are taught that they DON’T make mistakes. It’s as simple as that.

Bush Junior’s political – and ethical – misadventures in Iraq and foreign policy in general are ripping apart the Bush family like his alcoholism, boorish behavior and bumbling business dealings never could. Let’s face it, he’s been a walking family time bomb from the first time his privileged lips touched his first Scotch or his little prick nose snorted that first line of coke. Ah, and he finally found the stage to not only sink the Bush ship but the nation’s ship as well! Oh yeah, baby, stay the course! Stay the course!

Yes, Bush Senior should be crying. In fact, I’d say he’s coming a bit late to the crying party. Those of us with a modicum of common sense and compassion have been crying since that fateful day in March of 2003 when George Junior set this nation on this most perilous course of war, devastation and alienation.

So, welcome Daddy Bush. It must be hard to see a son fuck up so badly. But you’re in the best position to convince him to step aside before he messes things up even more. Now wipe those tears away and get to work saving the nation from you son’s continued blunders. It might even put a smile on your face.
Posted by Snarky Boy at 7:25 AM 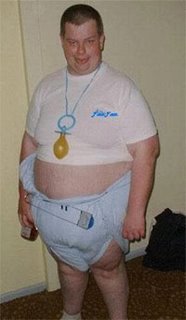 Oh shit, not another blank page. I’d rather be staring at a blank wall to paint this morning. But no such luck. The inside jobs are getting harder and harder to come by, especially with the economy turning to shit and every whack job without a job thinking they’re a painter. Yep, it’s a painter’s glut out there. Whatever.

Luckily, my finger healed adequately to get in some extra outside jobs during these last few weeks of w arm weather. And now, lucky you, it looks like it’ll be another winter of writing. With some extra cash in the bank and some time on my hands, I’m hoping to finish up a couple projects, spread the word wealth via my “other” name, and spread a whole lot of Snarky cheer. Stay tuned, my dear friends. Stay tuned.

My hobby of late has been to exercise John Odum over at the tight-assed Green Mountain Daily (see photo above). Poor guy, he obviously doesn’t get out much so I kind of took on a project to at least get his plump heart racing from time to time. It’s really not that hard. All I have to do is start spreading the snark amongst his sleepy diatribes and fawning fellow yawners and Odum goes all whacky. I think we’re up to about four Snarky aliases that Odum has frantically deleted from the roll over there.

I know, I know, it’s a really stupid hobby. But I get such a kick out of imagining Odum working himself up into a lather as he realizes his precious little site has been snarkified once again. Last Friday night, for example, it took Odum all of about 30 minutes to pull the plug on my “Baraka” alias. And that was only about 30 minutes after he yanked my “Abbey” login. He yanked that one while I was having a rather civil exchange with the Progressive darling – ponytail and all! – David Zuckerman.

Poor Odum, he just hates to lose control. But, please, no one spoil the secret by telling him he never had any. Let’s see if he can figure it out on his own.
Posted by Snarky Boy at 5:39 AM