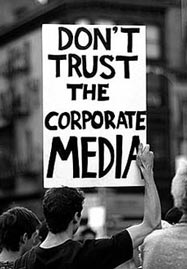 Did you catch the news that the former head of the Associated Press in Vermont and current host of Vermont Public Television’s news weekly, Chris Graff, just accepted a high-paying job with the National Life Group in Montpelier? If you did, you no doubt read the fawning, uncritical version about his jump to feed from the corporate trough. You had to, because there were no other versions, not even in our state’s so-called alternative publications. Surprise, surprise.

Unfortunately, it’s another sad example of the tight-knit nature of Vermont’s incestuous little media club. It’s the media club that acts more like a cheerleader for the hype of Vermont rather than digging for the reality. It’s the media club that never, ever asks a hard question of our incumbent politicians (and you wonder why they serve for life). It’s the media club that rarely embarks on investigative reporting. And it’s the media club that loves to backslap themselves and bring the *
And the good members of the club played along. You’d expect the bland reporters at the Times-Argus and Free Press to run with this story in the same way they run with most stories: print the press release and go back to sleep. But I can’t seem to shake the naiveté that our “alternative” publications would dig a bit deeper on this story. Alas, they didn’t. Peter Freyne at Seven Daze and Shay Totten at the Vermont Guardian covered the story just like you’d expect a butt-kisser to cover it: Yeah, Graff! Go, Graff! Our hero!

But wait, I can hear you saying, what’s the story beyond washed-up media guy lunges for the golden parachute of corporate life? Well, try these lines of reasoning:

* It was only a couple of years ago that National Life laid off a slew of employees and sent their jobs to India. And they handled it very poorly, breaking promises with long-time employees and treating them as if they were lepers in their last days of work for a “local” company they thought they’d be with for their entire working careers. And the men who orchestrated it: Brian Vachon, the man Graff is replacing and Tom MacLeay, National Life’s CEO, a man described by Graff as his “long-time close friend.” Well, how about asking Graff about what he thought about his friends’ treatment of their employees a couple years back? Or how about asking him if he would have handled it differently? Or if he had compassion for them?

* The Vermont media club also could have used the Graff announcement to question the ridiculous notion that the Vermont media is some liberal haven. If the head of the AP and the host of the state’s most popular news weekly is best friends with Republican corporate honchos and quite comfortably takes a job with them, how liberal/lefty can he be? The answer: He’s not, and the real problem with the media – other than their clubby nature – is their corporate mentality.

* What about the conflict of interest regarding Graff’s announcement that he was hired by National Life but staying on as the host of VPT’s show for several more months? It was only in July that environmentalists made an appropriate stink over Natural Resources Secretary Tom Torti’s announcement that he was taking a job with the Chamber of Commerce but wanted to stick around with his current job for a few more months. And Freyne and Totten jumped all over that one. But why won’t they jump on this one? Answer: They might not get invited back. If they’ve got no problem with a National Life executive hosting a news show, why not advocate that the head of GE edit the Free Press editorial page?

The late, great Pulitzer used to say that “newspapers should have no friends.” The folks in the Vermont media seem to have misread his quote, thinking instead that newspapers are a way to MAKE friends – not to mention money. But while they continue to backslap and cajole their way around their club, the rest of us are getting the shaft by the fact that they’re not doing their jobs. Sadly, there is no muckraking in Vermont. There’s only glad-handing and press release regurgitation. And there’s absolutely nothing alternative about any of it.